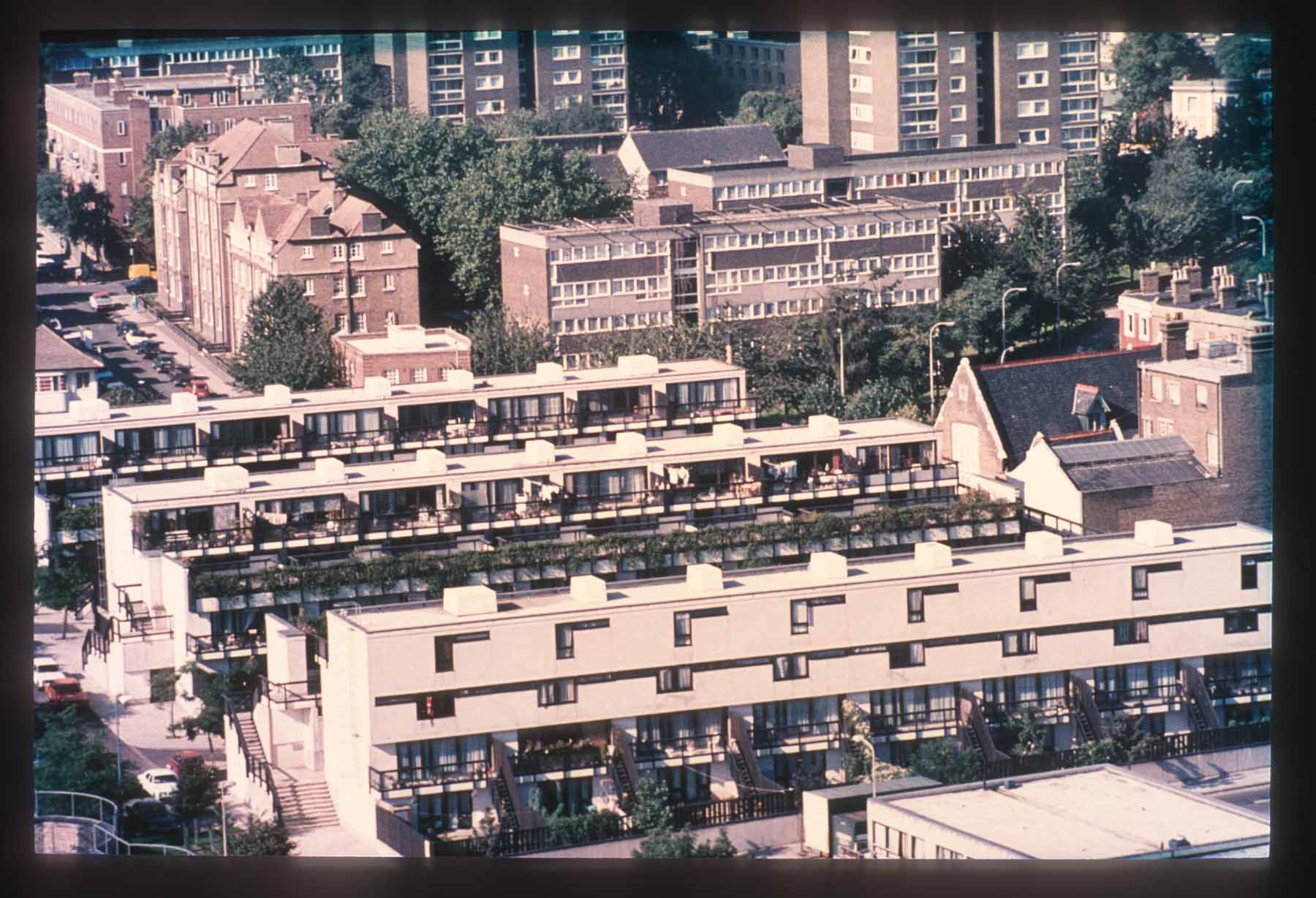 The work that I'm going to be showing you, is, altogether, housing; and it relates to mainly London, and English local authority housing, and it ends up with a small scheme that I did in Italy. The theme, I suppose, has to do with the nature of objects which you put in cities, these elements of housing are objects, but they're objects in particular places, and they have to belong to those places. So there is a very strong idea of context, not just the physical one of the place where the houses are, but a cultural one because the pursuit of the idea has been to integrate ideas of modernity, and freedom, and equality, and all of those things, with a respect and a regard for an ongoing culture. So the housing which I'm showing is exactly, and explicitly, London and England and British modernism because the culture it is belonging to is English. But, despite that, there are obviously ideas which pertain particularly, to the European city, but maybe even to urban ideas in general. The first of the schemes that I will be showing you is Fleet Road, in the Camden Town area of north central London. And it's a small scheme because it's about seventy eight dwellings, and it forms a solid block, a rectangle, that entirely fills its site. And all around the scheme, when we started it, on two of the adjoining sides, were Victorian and Edwardian typical London terraced housing, and on the other side, the edge of a large area which was also post-war housing down by Camden. But the characteristic of them was that they were blocks of building on open sites. But Fleet Road, in a way, is a critique of that, because unlike them, the rectangle of the site, which was created by the planners, is solidly filled by the block building, so that all its floor sides constitute frontages, either onto streets or walkways, and the building is low, and continuous, and solid within that. And therefore, despite its differences, it has a characteristic fit with the traditional English housing from the eighteenth and nineteenth centuries; certainly working class housing of the late industrial revolution period. The other aspect, quite apart from this notion of buildings in place, that is of great importance to me, is the relationship between the, the private dwelling, the plan of a private dwelling, within itself, and then the way it fits into a public scheme. You can say that there is a tremendous transition at the front door between the private world and the public world. That was certainly the characteristic of the old working class street. This is different, because I prefer to think of things as having change of meaning between public, and semi-public, semi-private and private; in order that the dwelling itself, and the whole life, which is private, can have interval between it, and the public realm, which constitutes a small group with varying degrees of communality. The reason why this is important is that the densities we're working at, and with the motor car, and with a variety of other factors, I think we have to structure our environment in a different way from the traditional one. So, if you look at this photograph, you will see there are basically three blocks of building, with green areas in between. And, round the outside, there are these flat frontages, which are similar to the sort of frontages you'd expect in nineteenth century housing. 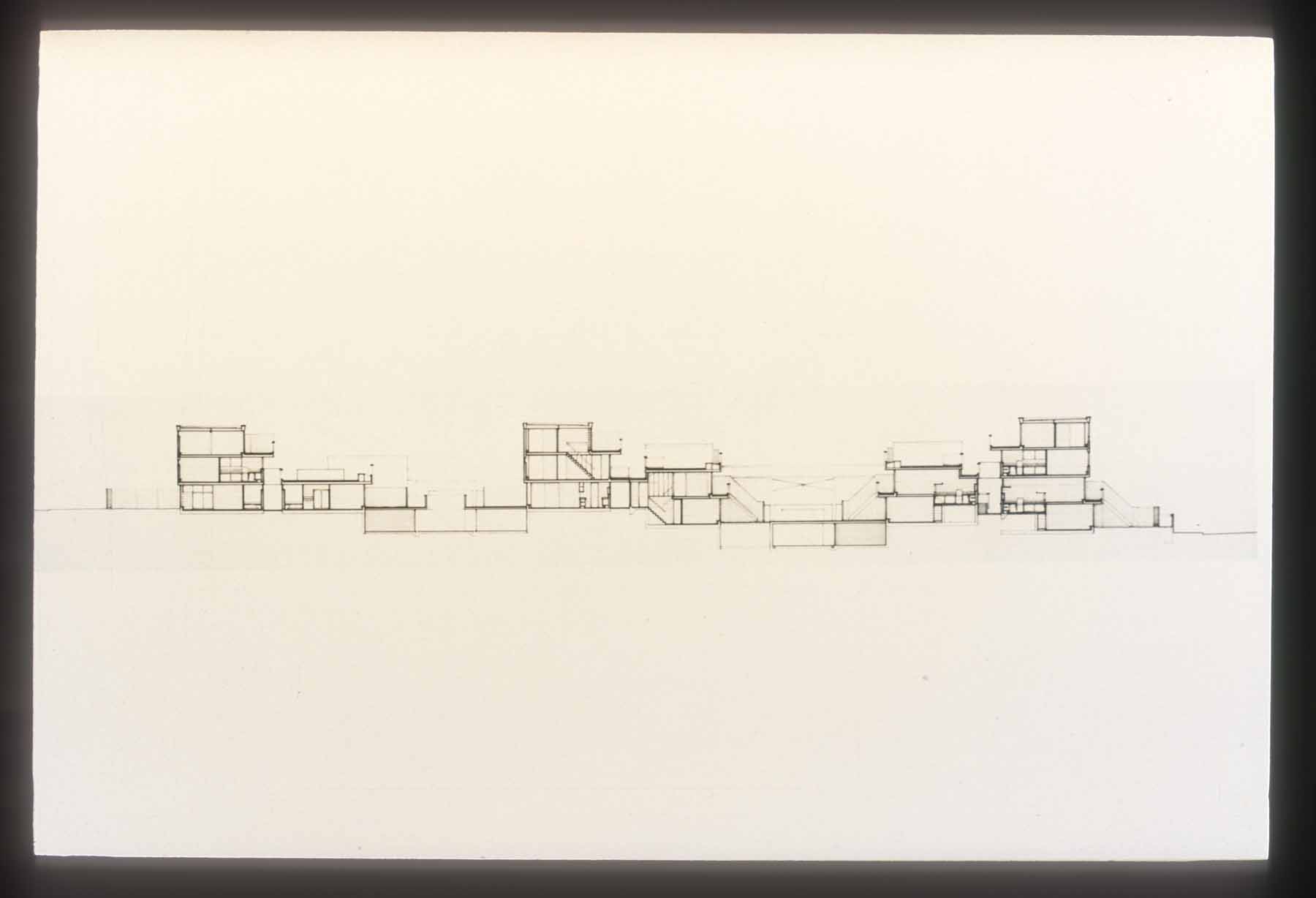 But then if you look at the section, you will see clearly that those three blocks are spaced, and in between them is a sunken garage area, which gives the dimension of the interval between the blocks. But each of those blocks is a double-block, and down the middle of each of those double blocks is an alley. And the alley serves the housing on either side. At ground level there are, on the left, small dwellings, two person flats, and then if you go to the middle section there's a, on one side there is a split level four person dwelling, and then if you go to the third one there are two split level four person dwellings, all with these alleys in between. And above, one of those blocks only, has another dwelling on top of it. These are the largest ones - five person three bedroom dwellings, and they are served by a walkway or an open alley, as it were, absolutely parallel with the one below, but to one side of that is a communal garden. So all the upper dwellings are private, with a bridge to the front door, in a typical London way, and each of those dwellings has a private terrace on its upper level which overlooks a public, or a semi-public garden, on the roof of the lower dwelling. And that is explicit, there's no doubt as to where it stops and starts, it is a particular private play garden the recreation garden for the seven dwellings which address it. And if you go back down again to the lower level, you'll see that between the blocks there are terraces which overlap the garages. For the most part it's a continuous surface, and that also makes a private communal garden for the small dwellings on either side of it. By doing it this way the building is also low, and we got a very high density - a hundred and sixty persons to the acre - into a scheme which is single storey, two storey, three storey, and in one place four storeys high. Nothing of that density, at that compaction, and at that low height, had ever been done in London before.