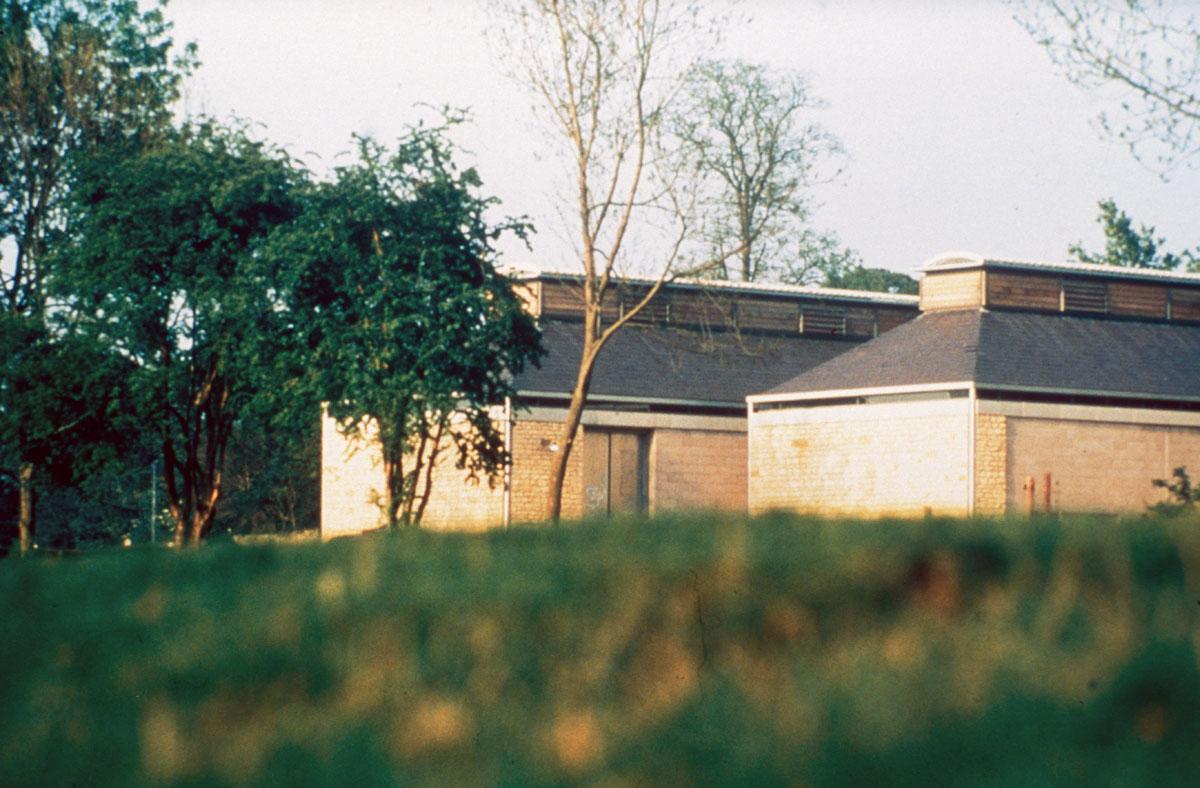 We're going to talk about a body of built work which we've completed in the last ten years since we've been in practice together. The buildings range from industrial buildings through to office buildings, a private house, a number of arts buildings built for the theatre, and a large social housing scheme. The first one is a factory and some offices for the makers of Doc Martens footwear in Northamptonshire. The issue for us here was how to understand the rural context that we were working in, and also the morphology of the village where the buildings were situated. The site is on the edge of a river valley in Northants, and the buildings needed to bond very closely to the rural grain of agricultural buildings. The factory part of the building was two parallel blocks which took their form from local agricultural buildings built of very simple materials - stone, rock slate and larch timber on the roofs. The idea was that the buildings would not only respond in scale and grain to a local context, but also mellow over time so that they began to grow back into the landscape and the materials would weather and become cracked and distorted; and we detailed the building to that effect so that the operations wouldn't affect the performances of the building, would actually allow it to grow back gracefully into its context. 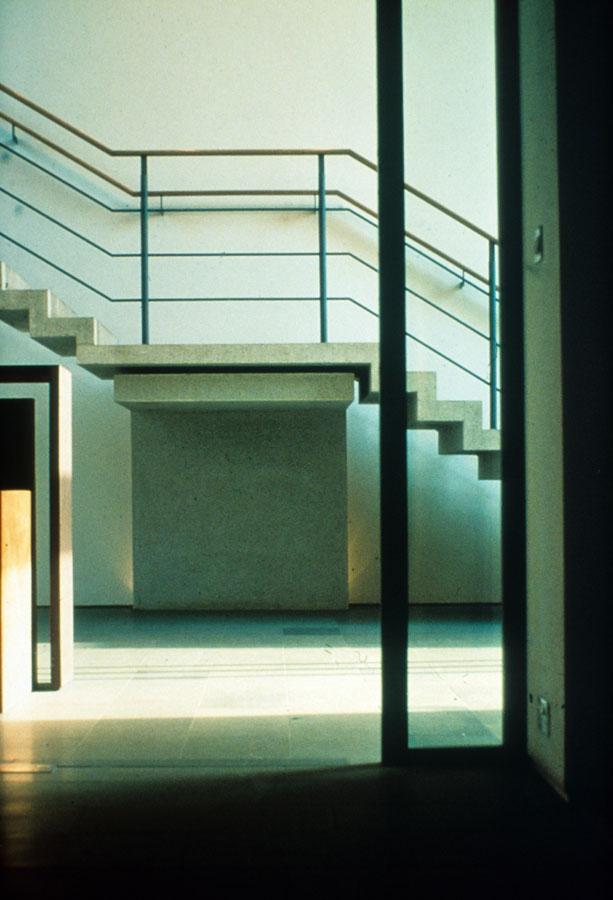 The interior of the building was quite carefully considered in terms of very simple direct forms, taking the external materials through into the interior, using stone again and very simple timber painted plaster. So that the conversation really was about the way that light came into the building, the way that light hit materials, the way materials responded to each other. We studied the relationship of natural and artificial light very carefully in this building, and I think that although it's our first building it's still quite a successful project. The interesting thing about the Wollaston project is that it's one of the first occasions that, as a practice, we worked in very close dialogue with the main client on the site. The fact that it belongs to Doc Martens who make boots and clothing, the chairman of the company took a very keen interest in this building because it was the site that the company originally started on, about thirty years before. So we had a very interesting dialogue with him and it was something that at the time really helped us in other projects that followed later. Because in most of the projects we've done, we've been very fortunate in having very good clients to work with. So we've worked in dialogue, we were not just architects working in the studio producing the design and then building it in isolation. And I think that's common to most of the projects. It helped us to think about the story of the building as well as the physical form of it, the story both of the client and the way they evolved on the site, and also the story of the village and how that evolved over time as well. And we began to think about issues of archaeology in terms of keeping elements of old structures that were on the site, working around them, working into them, being very conscious of the memories around the site, both physical and cultural. Fragments that we were able to work with became quite a common theme to a lot of our work from there on. It was the first project also that we collaborated with an artist, we worked with Grenville Davey. He won the Turner Prize a couple of years ago. And that was a very interesting precedent for us as well which subsequently transformed into other projects. We worked with artists subsequently. But the work we did with him was a wall piece in the main entrance, a series of big circular sculptures. And, again, this was something that the client was very keen to support. One of the aspects of the building which is worth noting is that we became very interested in sustainable construction, sustainable systems. The whole of this factory and office was naturally ventilated, and the mechanical plant was about twenty percent of the normal plant used in these sort of buildings. And again we were lucky to have a client who was prepared to invest in that sort of architecture. It costs more to build but is a fraction of the running cost. There's also an interesting issue here about the forms that we chose to use. They're very traditional forms in many respects, very simple agricultural buildings to look at from the outside. We built it to look like contemporary barns. They look like traditional structures on first take. But then you look at them again and they've actually got a twist in the way that they're detailed and the way that the materials are handled. So they are utterly contemporary in terms of the way they manage materials, light and sustainability issues and mechanical systems. But they were almost a cultural memory built with them, the way that they looked, and yet they look familiar. It was a big debate in the office at the time, whether you should design buildings that look as though they had been there for one hundred years, or whether you should build something that was just completely contemporary and state of the art, a gloss shining box and something that was really being done on it. And indeed it's quite a brave move I think for the time. As a young practice, you tend to want to make a statement. The client was very good in resolving that issue in some way, because he brought it out that their own product, the Doc Martens boot, was quite analogous to what we were trying to do, in that it was essentially a vernacular object, very familiar using very traditional craft techniques; but actually the way it was detailed, the way it was trimmed and edged, was actually, it became quite a chic contemporary object. So we drew comfort from that.