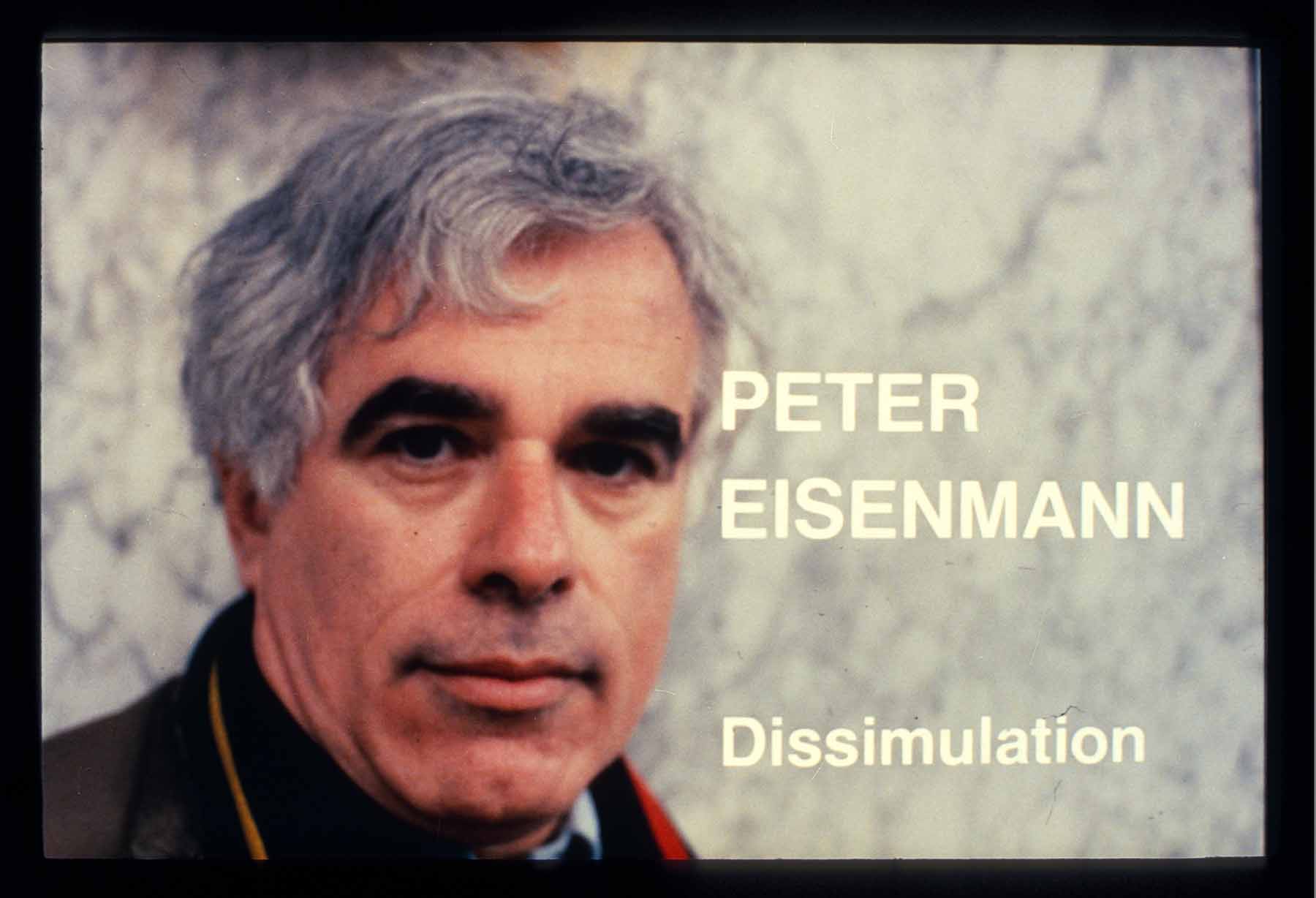 I want to talk about the condition of architecture today as I see it as different from, or potentially different from, a condition of architecture which has existed for five hundred years. That five hundred year old tradition I would like to call the Classical. The Classical I would define as primarily representing a difference between what was real and what was illusion; that is, what was represented. This distinction, prior to the fifteenth century, the representation stood for something, it had meaning. And that meaning was within the building itself, as opposed to referring to something outside the building. With the advent of the Classical, the representations stood for other representations, and instead of the meaning of what was being represented being present in the building, the meaning was outside in some other building. This led to a situation where, for me, the Classical was dealing with messages rather than meanings. Today, five hundred years, let's say, after the change-over from the theocentric world to the anthropocentric world, I believe we've lost the distinction between representation and reality. There's a lot of evidence around us. The President of the USA has a press conference, and this is not a real occasion, it's a media event. Why do I say that? Because the meaning of what he says is not in what he says. It's rather a message. The meaning lies someplace else. Secondly, when you go to an athletic event in this country, when you go to a baseball game, at the baseball game there is a TV monitor, a huge TV screen, which allows you to watch replays of what is going on, in fact allows you to watch the game. People are so conditioned to watching replays on TV that they find it very difficult to watch the reality. I see this in my children; I see this in my students. The thing is, for them what is real and what is being represented? This has led to a rise in what I call simulation, that is, to try and represent what is real. When you lose the distinction between representation and reality, then you have to try and recreate reality. This leads to a situation of simulation. The Classical, in fact, the five hundred year old tradition of the Classical, I could argue was a simulated attempt to represent the Classic: that is, that time prior to the fifteenth century which was timeless, where meanings were inherent in the buildings rather than buildings representing other buildings. This simulation was first talked about by Alberti when he said "To build a cathedral today (in the fifteenth century) we need to import antiquity, something to give us a sense of the timeless, to give us truth, to give us goodness, and to give us beauty". So he imported for Sant'Andrea in Mantua the triumphal arch from Rome. So here he takes a piece which is antique and he brings it to the present to verify. What happens is, with the loss of reality, and the distinction between representation and reality, there is an increased need to verify rather than to experience: that is, if we are uncertain with what is real that is the truthful, the good and the beautiful we need verification, that is, judges. Now, how did this happen? I would argue that prior to the fifteenth century we had an architecture of face value. In a sense when we had a theocentric cosmology, that is, when God mediated between Man and Nature God's work was seen as timeless, there was an aspect of the timeless, that is, the Classic in what was done. The Gothic cathedral did not represent another building, it really represented itself: that is, what it stood for, what its meanings were, were inherent in the cathedral itself. When we got to the fifteenth century, the anthropocentric cosmology (that is, Man is the mediator between God and Nature) took over and we had this loss of the timeless, we had the loss of what was real, what was truthful and good. And therefore we needed to verify. And in this need to verify, we began to draw on the antique and the historical. Architecture no longer represented itself; it was no longer an architecture as is, or face value. It began to represent other architecture. It began to be messages, like the press conference, rather than meanings. Now, this is the situation I believe that has taken place and deteriorated over the last five centuries. The Classical deluded us, through representation, reason and history, that it was able to sustain a reality, a condition of the timeless. Now my argument would be: what can be done, not to express the Zeitgeist, the present, not to be concerned with the future, not to be in fact relying on the past? And, in this condition I would argue that the only possible alternative is an attempt again to regain the timeless. Now, once we've fallen from grace, once we no longer have an Eden on earth, once we have the knowledge that the timeless is in fact something which can be replaced it has been for five hundred years how can we represent that condition? My argument would be that we cannot do it through representation or simulation, but rather we have to do it through what I call dissimulation, that is, what something is not. When you simulate something you are attempting to be as real as possible. When you are dissimulating you are trying to show that in fact you are not being real. We cannot replicate the conditions of difference between reality and representation that existed prior to the fifteenth century. Nor can we represent them. We can only signify them, that is to create a text. We can signify them by the process of dissimulation, that is, to place in a text, in architecture what the conditions are not. 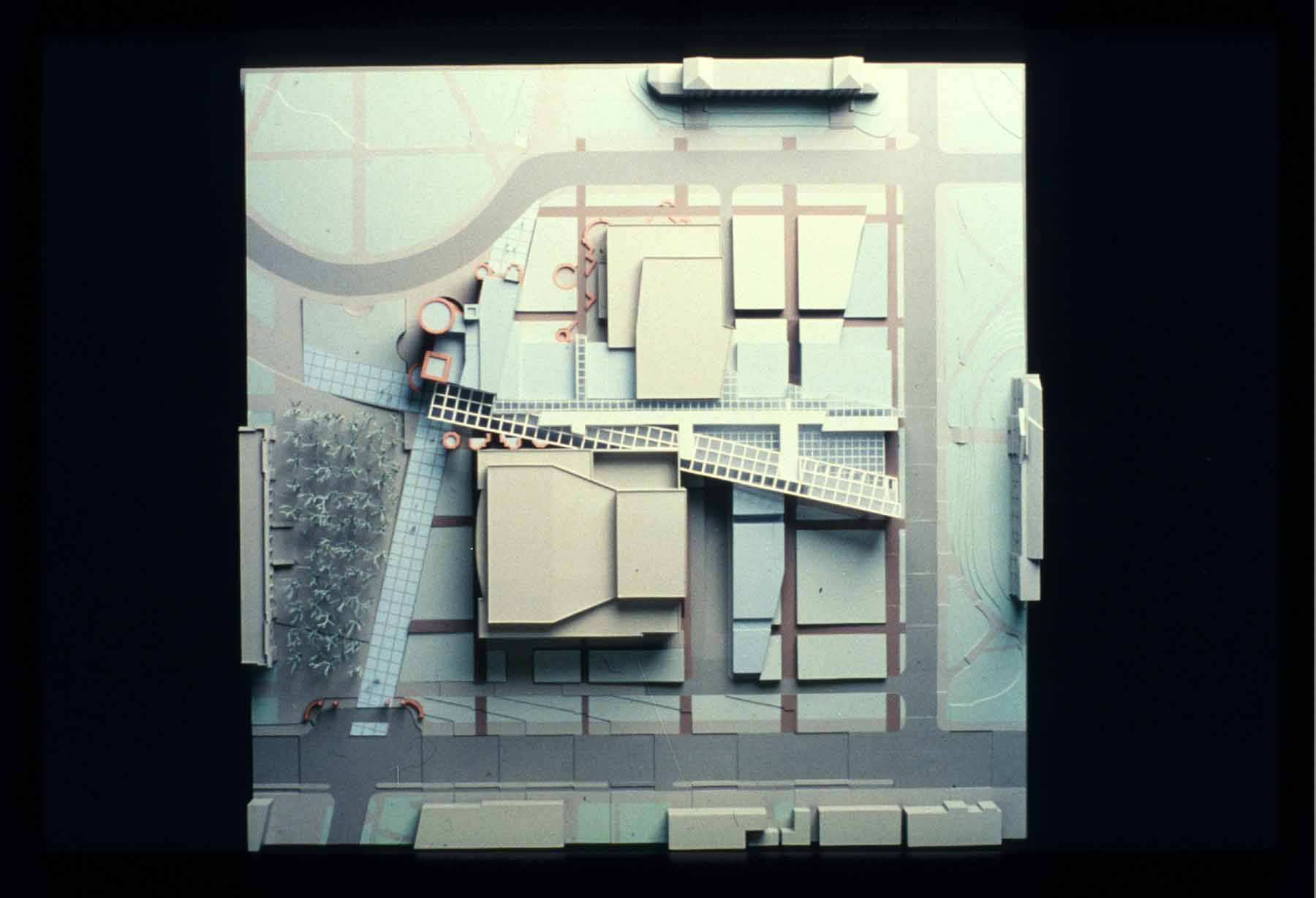 I believe that the project that we have won a competition for, the Ohio State Visual Art Center in Columbus, Ohio, is a very good example of a way to dissimulate, that is, to show what something is not. The Ohio State project represents in one sense a critique of my own Modernist work. It is also a critique of the present attitude towards Post Modernism with a capital P and a capital M. It sees the Classical, the Modernist and the Post Modernist as all part of this five hundred year old tradition which in fact has brought us to a condition and a position where we have lost face in history and representation and in reason. Basically the Classical distinguished itself from the Classic in the fact that it related to something outside itself, to origins something outside of the architecture. What one is doing in Ohio State is inventing its origins; it is an action on a condition of site, of program, on history and on representation which deals with the problem of invention. It invents its site, it invents its program, it invents its own history, and in doing so is an act of dissimulation. And it invents its own representation and as such it becomes a text. It is a record, as a palimpsest would be, of its own history. It is, in a sense,-an archaeology of its own existence. History in the Ohio State project reads as a device. When we read the history here, we don't read an external history but rather the history of the act of making the object, the act of making architecture, the act of massing. So that we have an object which contains no architecture, but rather an act of metaphorising towards an architecture, towards an object.