The first image is of Berthold Lubetkin himself taken in 1948 at the age of about forty six or perhaps just forty seven, at the height of his powers, full of energy, full of confidence, ideas, the man of action, loosened tie, sleeves rolled up ready for the fray. Berthold Lubetkin has been described as having as good a claim as any to being regarded as the greatest architect in Britain of this century, yet he's also called one of the most overlooked Modernists. For a whole generation of architects in the 1930s, he was their guiding light, an inspiration, a pathfinder. Then, for another younger generation, he became in his old age, in the 1980s, a legend, a cult hero, a sort of guru. One thing is certain, if you want to understand the history of twentieth century British architecture, you have to grapple with Lubetkin and try to make sense of his extraordinary story. For my part, I believe he was by far the most original architect of his generation. His contribution even now is probably not sufficiently recognised or understood, despite the fact that virtually all his best known works - twenty five buildings in total - are statutorily protected, three of them Grade I, the highest category available, making Lubetkin certainly the most listed architect in Britain. It seems to me that Lubetkin's work and writing, as well as providing a wonderfully rich expression of, and critical commentary on, the Modern movement in architecture, also offer all kinds of valuable insights into current issues that Continue to preoccupy and perplex the profession. Lubetkin, for me, exemplifies the key ingredients of the Modern movement: the vision of architecture as an instrument of social progress, the beneficial use of technology and innovation, and a pursuit of a radical aesthetic. But Lubetkin was no functionary and was far too intelligent and artistically accomplished to swallow a party line. His work is deeply personal, philosophic and poetic, and while he has always to be seen in the context of his period, I think to a large extent he belongs in a class all of his own. Let's go back to the beginning and look at the formative period of Lubetkin's career which effectively determined his political orientation and his artistic ambition, even before he reached this country. The story starts in Tiflis in the southern province of Georgia where he was born in 1901. It's known that his mother was a Georgian and his father was a Muscovite, what we would now call a small businessman who was active in importing and distributing specialist equipment, and his father's work involved a good deal of travelling and Lubetkin often accompanied him. Even before the age of twenty or twenty one, when he left Russia, he had already visited Scandinavia, Germany, Belgium, France and England where he first made a schoolboy trip in 1914. This seems to have engendered his enduring sense of rootlessness. He liked to refer to himself as an outsider: the cosmopolitan polyglot sort of pan-European wanderer. Lubetkin's early life took him from Tiflis to Rostov and thence to St. Petersburg and to Moscow where he studied. And his period of study in St. Petersburg and Moscow certainly brought him into contact with the beginnings of radical modern art in Russia at the time. The Russian Revolution led him towards his future vocation as a politicised artist. He'd enrolled at the Stroganoff Art School in Moscow and became involved with the system of free workshops or Svoma which were set up after the Revolution. He became involved in Vkhutemas studios and became acquainted with some of the leading lights of that period - Rodchenko, Tatlin, Lissitzky and others. So the important thing is the atmosphere that he imbibed, this vision of society on the brink of change, art and society in a state of mutually inter-dependent transformation, and art working for the future of the Revolution. In 1922 Lubetkin left Russia, not, as he thought at the time, permanently, but to widen his experience to learn, see more, find out about actual building competence that he realised was going to be necessary if some of those early brave slogans were going to be translated into real and useful architecture. His period of travels took him to Berlin, to Vienna, to Warsaw and eventually to Paris where he arrived in 1925. But it would be wrong to see this period as a sort of political defection from the USSR. He was very careful to keep in touch with Soviet developments throughout his travels, and also remaining engaged with architectural discourses in Russia through the medium of competition. Several of his entries survive.


Palace Of The Soviets. Model & Plan 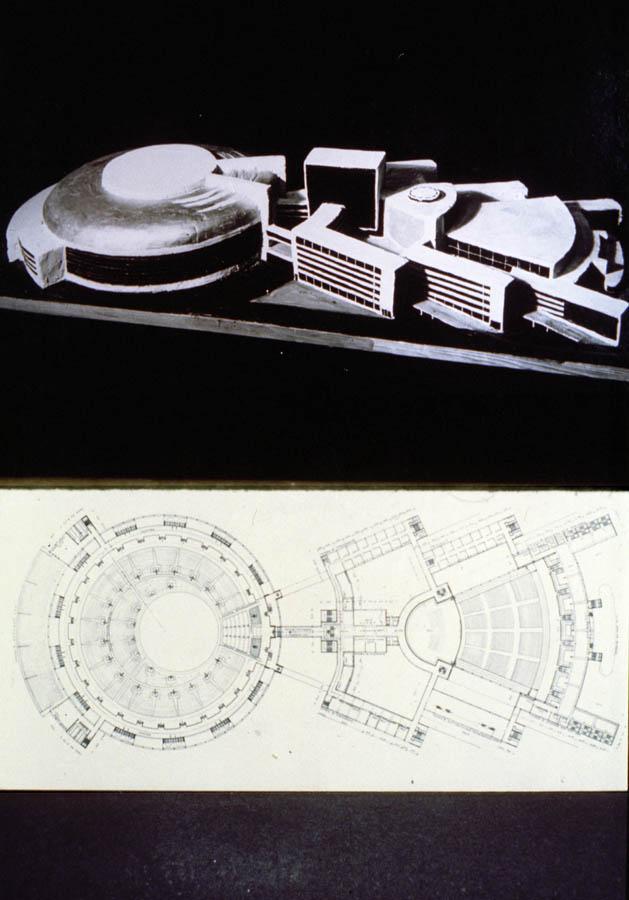 But the most substantial competition scheme he undertook was for the Palace of the Soviets in 1931 with two colleagues from Warsaw, Sigalin and Blum. It was a major international competition attracting entries from all over the world including the Modern masters Corbusier, Perret, Gropius, Mendelsohn and Poelzig amongst others. Lubetkin's entry, which received a cash prize, illustrates his confidence and systematic organisation of a daunting brief which called for two huge auditoria to seat fifteen thousand and six thousand people respectively, extensive office accommodation and a vast library. The plan is surely a sort of fusion of the two architectural strands of his training and his early experience, the dynamic Constructivist influences from Russia and a certain Classical rationalism which he absorbed during his studies in Paris. It's certainly not difficult to see already the strong geometrical character of the plan that provides one of the most consistent themes of Lubetkin's mature practice. Paris certainly represents the culmination of Lubetkin's process of self-education. He arrived in 1925 just on the eve of the huge international exhibition and participated in some of the site work going on on Melnikov's Soviet Pavilion. He also met Le Corbusier for the first time here when he was building his Pavillon de l'Esprit Nouveau which was close by. So far as his formal training is concerned, he attended the École Spéciale d'Architecture and the École des Beaux-Arts as well as two other courses on town planning and reinforced concrete design By far the most formative element of this upon his future practice was the short and unofficial period at the École des Beaux-Arts where he attended the atelier of Auguste Perret, who, at that time, was the foremost French practitioner of reinforced concrete architecture. Also one cannot overstate the impact of Paris itself, both as a planned city, and in terms of its artistic and intellectual ferment in the 1920s, the cafe culture that brought together all the leading figures of the avant garde, with most of whom Lubetkin was acquainted.