I've called this piece creative conservation and the reason is (for me) the generating idea of a building comes from what you have to meet, i.e. the needs you have to satisfy over the whole range, quantifiable and non-quantifiable and from the conditions found, your sense of place and the interpretation of that sense, the generative creative interaction between you, the means at your disposal, your understanding of the brief, the gradual perception of all that it contains, the resonances that all these strike in your consciousness, releasing your private storehouse of knowledge, of perception of the place in history, of precedents, of things known and unknown. Some image is formed and lights the design process, yet the final outcome may be totally unrelated to that image, or seem so. But who knows? Aalto has written about this, describing the creative process that preceded the final design for the Viipuri Library: "For long periods of time, I pursued the solution with the help of primitive sketches. From some kind of fantastic mountain landscapes with cliffs lit up by suns in different positions, I gradually arrived at the concept for the library building. The library's architectural core consists of reading and lending areas at different levels and plateaux, while the centre and control area forms the high point above the different levels. The childish sketches have only an indirect connection with the architectural conception, but they tied together with section and the plan with each other and created a kind of unity of horizontal and vertical structures." In my own way, when I was designing the King Faisal Conference Centre and Hotel at Riyadh, I arrived at a metaphor of what it should be, how the elements should relate. An image of a temple, contrasted with a sort of residential hill: white against desert browns. This had something to do with the South Bank and the relationship between the Festival Hall and the Elizabeth Hall/Hayward Complex, seen as a landscape crumble against the classic formality of the Royal Festival Hall. A landscape that sadly never got its planting. My own professional experience has extended from what once used to be called conversion but is now dignified as restoration and conservation, to a range of new-build, mostly school, university and social buildings to major construction projects in Saudi Arabia that concluded with the British Embassy and its various residences in Riyadh. Currently our practice is heavily involved in the re-ordering of major buildings by Wren, Hawksmoor and James Stuart for University use in Greenwich, at the Royal Naval College complex, formerly the Royal Hospital at Greenwich. Personally I do not see such work as independent of new-build work, as it were an entirely specialist concern. Nevertheless the tendency in all architectural work today is towards specialisation and it becomes increasingly difficult - such is the range of technical issues in so many building types - for a general practice to break into fresh fields. The process of selection and appointment of architects is now such that you have to have had a track record in a particular field before you can get into that field. One might cite here the former practice of Powell and Moya and the diverse range of buildings for which they were responsible. Housing, hospitals, university, public buildings: their architectural imagination enriched design development of each type, often breaking the mould of stereotype for that sort of building, notably in hospitals (probably the most stratified of architectural formats) where their example argued against type-casting and the technical faceless uniformity engendered by production-line design in specific task-orientated buildings, without speculative interest in the nature of what is required. Against such division of labour in specialist firms, one would like to see in this country a greater spread across diverse practices, as against the pressure of our time towards building procurement methods, such as Private Finance Initiative, Design and Build etc, which in their nature are likely to discourage architectural thought and quality, offer the mediocrity of the middle way, design by assembly of parts, from without rather than within, and I think this is the important point. It might be said that bringing existing buildings and their conservation into the design process, offers an additional dimension and enriches rather than negates modern design. Perhaps there is not a fundamental division between working within the fabric of old buildings or in the field of new building. Architectural tasks are indivisible; the same discipline should inform work in both contexts: only the bias is different. Whatever the task, we search to find the nature of what we have to build, to establish a format, to create an entity out of a range of needs, to examine that entity and clothe it, to compose it into the physical, determine its nature and how it should be realised in a built fabric. Except perhaps for pure conservation work, this holds for all architectural tasks. But where an old fabric is involved, the conditions found include a physical entity that has to be listened to, one must discover its true nature, be aware of its structural, spatial qualities, its dimension in time as well as its physical dimensions, historic overtones and archaeological considerations. With an old fabric, needs of use may call for expansion beyond the existing limits of that fabric. There might be an ideal plan, a concept of how the development might be, which has to be "in sync" with what exists. While needs of use must be satisfied, the architectural task (as in all work) lies beyond that in the line of art, the poetry of space and form But for what exists, our task is to clarify its nature, its poetic qualities which extend in a time dimension as well as an architectural one; our aim being to realise interventions that enhance what is old, and old fabric that sets off the new. The art of poetic juxtaposition as opposed to extending in the fashion of the style of the existing fabric. 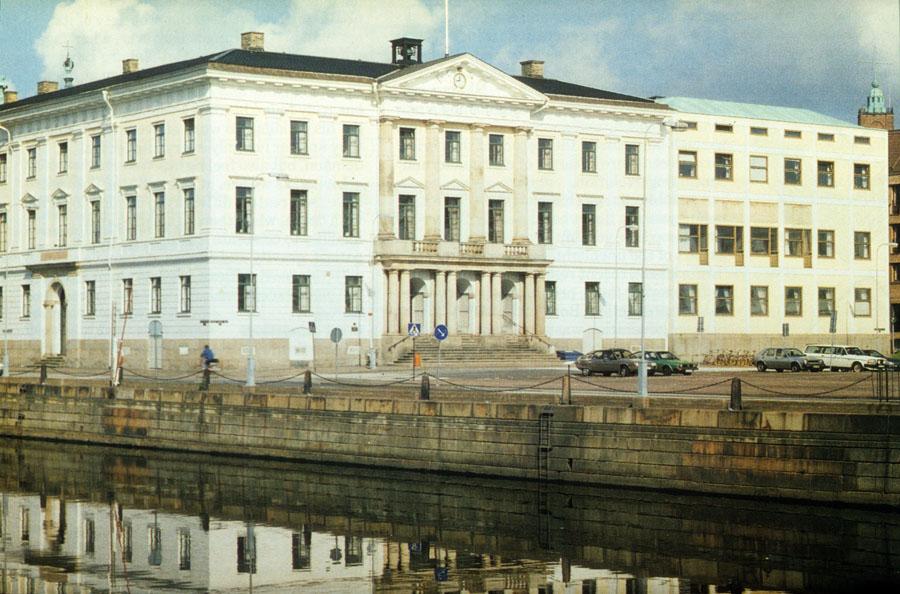 There are what now could be called classic examples of this philosophy. Foremost perhaps is Asplund's most revered extension to Goteborg Town Hall (1937), the result of a profound series of studies over a long period. Rather different but nearer our time, a concept that certainly stirred my imagination, was the incorporation of Roman ruins in the great concourse of Rome Station (1949 - 1951).