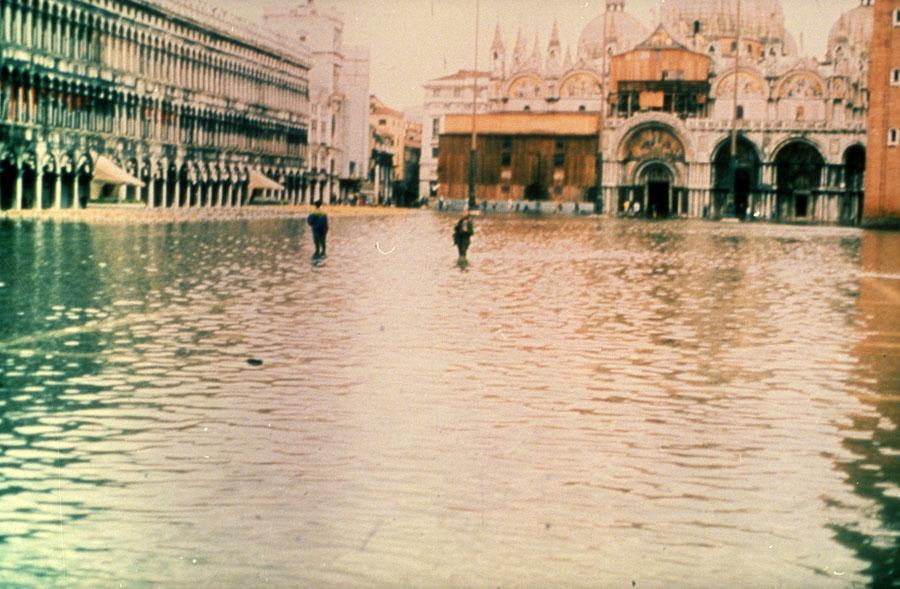 Scarpa had the opportunity of encapsulating the idea of Venice in an exhibition he was asked to design in Turin in 1961. This exhibition stand of the Venice pavilion in the exhibition was called The Sense of Venice, the Sense of Colour and the Control of the Dominance of the waters. And a very memorable stand it was indeed that he designed because he placed first of all trays of water on the floor which are filled to the brim and are just about to overﬂow. And this is a theme we find in all his work, the idea of the potential disaster of overﬂowing water, the way the water almost overflows into the various “campi" and "piazza” of Venice. And above it arranged a marvellous glass chandelier made from Murano glass, and coloured glass also from the same source. And the exotic quality of Venice works its way also into Scarpa's work. We have to remember of course that historically Venice was the city that controlled all access between Europe and the East until the Portuguese found their way round the Cape of Good Hope. And it had, as a consequence, an incredible connection with the Islamic world and then with the Oriental world. And this works its way backwards with a kind of love and fascination with gold and precious stones and remarkable colours. Those colours can be captured in a special Venetian material called 'stucco lucido' or Venetian plaster work which Scarpa worked with the Di Luigi brothers in resuscitating really. And this plaster work applied in many layers has not only a remarkable ability of translucence but also captures incredibly intense colours. So the pavilion in Turin is, if you like, an abstraction of certain of these qualities of Venice.